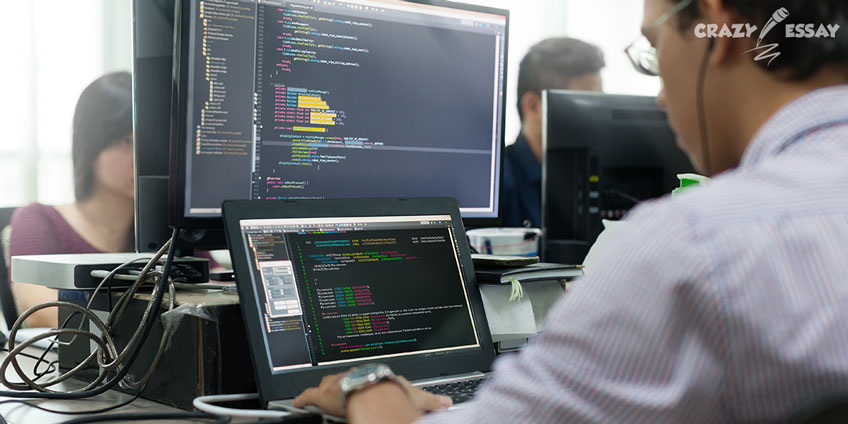 Today programming languages of the future are gaining momentum, since both programmers and average netizens question the very dynamics of evolution of the most popular of them: Java, Python, C, etc.

Some of them are solid at where they are right now, and nothing can predict their slightest backset despite some non-threatening fluctuation in statistics. On the other hand, new programming languages are emerging now and then. But that’s not the whole story of the trends nowadays, so let’s have a closer look at what we can expect in the years to come.

Our professional essay writers have selected some surprising forecasts.

2017 is by all means over, and that means we can easily analyze the main trends and make conclusions. So, what languages defined this year in terms of their extensive and widespread usage?

First of all, the top 5 most in-demand languages for December 2017 are (in descending order): Java, Java Script, C#, Python and C++. If we take a look at the real market share for the same period of time, we will see Java, C, C++ Python, C# in the top 5.

The similarity is visible despite different positions taken by different languages. They obviously have remained popular for the last several years, and according to experts in the field, there’s still little indication of their decrease in popularity, with the exception of Java Script that is losing popularity, at least in 2018.

Nevertheless, when we have a look at the second criterion, we may notice that several rarely used languages (APEX, for instance, and several others) try to make their way to the top 15, and that may be another indicator of changes we are expecting.

Making predictions for the current year is obviously much easier than going into some long-term prophecies (well, yes, sometimes they are nothing but prophecies). Although there exist quite a number of credible opinions you can get acquainted with.

We have analyzed the previous year, and we are well aware of the fact that the trends for 2018 are already in play. Our objective is just sorting them out and putting them into somewhat digestible shape.

So, as both statistics and IT experts demonstrate, languages such as C and Java will definitely remain on top. But this layout may be complemented by different dark-horse candidates, such as Kotlin, the development language for Android platform that has every chance to rule the word in the near future.

How We Can Define Future Trends

Of course, it’s difficult to foreknow what will be trendy in the years to come. It’s about both intuition and strict logic. First of all, we have to make sure the most popular languages nowadays are really steady on the ground and whether the future needs in programming will be conferred.

Secondly, as we mentioned the needs in programming, we need to elaborate the strategy for understanding what they will be, or rather in which direction they will go soon.

Thirdly, we have to correlate the logic of development of those needs with the evolution of the newly found programming languages and come up with our personal evaluation (well, there’s no escaping it) of their potential to meet the aims, taking those needs into account. Thus, a certain framework of articulating future trends can be elaborated.

If you want to get your Computer Science paper done on time and avoid going through everything we’ve just mentioned, all you need is specifying the deadline and instructions. Our expert will do the rest for you.

So, What Are Those Curious Languages of the Future?

These are languages with different history and different purposes. But the one thing they have in common is that they are still awaiting their time to break into mainstream, whether they are second-tier (being on the threshold of wide usage in different spheres) or third-tier languages (waiting to make an impressive crafty leap from underground to popularity).

Having good press in 2017, Kotlin is on fire in 2018. It’s already considered an official language for Android platform. Giving the fact that the bright future of Android doesn’t raise any questions, Kotlin still has everything to convince us of its breathing space in tight competition with other up-and-coming programming languages.

Go has very good potential to become one of the mainstream programming languages in the near future. Its availability and predictability of that friendliness of Google everyone feels deep inside is also an important factor.

That’s one of the strongest candidates, not just because of its image of the most “loved” programming language. With the motto of being “safe, concurrent, and practical”, it’s very likely to win even more programmers’ hearts than it used to.

It can be used with Javascript. Boasting of a helpful compiler and fast operating features, it’s once again the language with user-friendliness at the very heart of it.

It is a functional language with academic code useful for solving real tasks, which don’t occur very often. Several well-known projects, including Facebook, have already used it with pretty good results.

Voices of the Past

That may not be the era-defining trend, but there’s still some possibility that languages of the past may come back and begin to play not-insubstantial role in programming landscape of the near future. So, what are the main candidates?

First of all, we should mention Fortran, Lisp, and MATLAB, without forgetting the fact that Javascript, Ruby, and C, of course, are no youngsters either. It’s very unlikely that they’ll manage to be on top, but the mere fact of their steady position is interesting, to say the least.

To sum up everything we’ve come up with today, it’d be helpful to point out that the landscape of programing languages of today is very rich. Different trends manage to coexist within its framework, making our time exceptional in its diversity and unpredictability.

But if you are not a fan of unpredictability and want to be 100% of your academic future, you are welcome to get essay help in quite a wide array of disciplines. Just go for it right now.